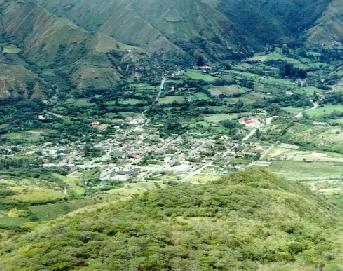 The town of Vilcabamba

Beginning with Miguel Manuel Andrade some thirty years ago, and continuing to this present day, Saraguros have been migrating to the Vilcabamba Valley in search of higher pay, more productive lands, a more temperate and healthier climate (as some have attested to), and now, there is an established Saraguro community thriving in the valley.

Located in the temperate mid-altitude (1400-2000 meters) Andean highlands of southern Ecuador, Vilcabamba has for years attracted immigrants and travelers from around the globe. As the throngs of travelers and immigrants seek spiritual enlightenment, search for the fountain of youth described in many fabled stories of longevity, or chase down the wealth and fortune from the surrounding environments, the Saraguros in Vilcabamba have slowly been recreating and adapting their culture to their new home.

Numbering between 150-200, the Saraguros living in the Vilcabamba Valley are becoming prosperous and most state they are living happily and healthily. Almost exclusively originating from the same parroquia (parish) of Selva Alegre in Saraguro Canton 100 miles to the north, most Saraguros in Vilcabamba, or Vilcabambanos as all locals are called, report they are happier living in the Vilcabamba Valley than their native Saraguro area.

The Saraguro area, located around three and a half hours drive directly north but situated at a much higher elevation, has, for the past few decades, become increasing over-populated. (Belote and Belote 1994). Most of the Saraguros living in Vilcabamba have stated that this over-population, in turn, has kept wages in the home area at almost half the daily rate of the wage in Vilcabamba. Higher paying jobs coupled with the distinctively more fertile and productive lands in the Vilcabamba Valley have been the driving force behind the migration over the years. But recently, the flow of permanent migration of Saraguros into the Vilcabamba Valley has diminished to a trickle and most of the migration today (about fifty people a year) is in the form of seasonal wage labor. In the near future, most of the population growth will stem from internal forces. With an exploding birth rate and continuously lowering mortality rate, the Saraguro community in Vilcabamba is steadily expanding. The seasonal migrants live with their Saraguro relatives who are concentrated in two different communities in the Valley, Uruche and Mollepamba.

Uruche, located approximately two miles from the town's center, is home to about forty Saraguros (four or five families) who mostly make their living as sharecroppers, day wage laborers, and subsistence farmers. The Saraguros plant cash crops such as bananas and coffee for the landowners in exchange for the right to subsistence farm and graze cattle. After years of hard work in Uruche, which is a constricted slice of land no greater than a half kilometer wide, many families save up their money and buy land in the larger Saraguro community located in Mollepamba.

Mollepamba, is also located around two miles from the town center but in a more southerly direction. It has a thriving Saraguro population of around thirty-five families. Here, the Saraguros have essentially recreated their cultural and agro-pastoralist ways with minor adaptations. Many of the families own substantial parcels of land that allow them to be almost fully self-sufficient. Furthermore, being located in a more diverse growing region of Ecuador, the Saraguros of Vilcabamba cultivate a wider array of crops than their native Saraguro area counterparts. Crops including coffee, sugar cane, sarandaja (a specialty bean favored by many Ecuadorians), sambo, oranges, lemons, peas, beans, and of course maize, can be seen for acres. Easily discernible too, are the many cattle grazing upon the mountainsides. And, interestingly enough, much of the daily diet is consistent with that of the Saraguro homeland, right down to the raising of guinea pigs and chickens.

Moreover, the Saraguros in Vilcabamba have maintained, to their best abilities, many of the cultural appearances that are distinctive to Saraguros in general. The men, wearing their traditional short pants, hat, and hair tied in a single braid running down their backs, are a commonplace sight in and around town. The women, too, can be seen wearing a single braid, their traditional hat and pleated skirt (called an anaco), and are adorned with their handmade colorful necklaces.

But adaptations are apparent. Probably due to a combination of factors including climate, income, and the tourism industry, many of the Saraguros in Vilcabamba will be seen in a combination of traditional and western dress. Most of the children go to school in the town center and are exposed daily to the thriving tourist trade. Young Saraguro boys are today seen in western style baseball caps, western imprinted T-shirts, but still wearing traditional short pants and long braided hair. Furthermore, resulting from a combination of warmer temperatures, and less accessibility to wool, since they don't raise sheep in this area, one of the main features of Saraguro women's dress in the home region, the traditional shawl and pin (tupo), is rarely seen in the Saraguro community in Vilcabamba.

Almost absent too, is their native language, Quichua. Quichua is rarely spoken there; only a small number of the oldest generation (people over 60) know this language. However there is interest in maintaining it, and there is a community effort underway for bilingual schooling in Mollepamba, and plans for their youth to make cultural field trips to the home area of Saraguro for the purpose of maintaining the language and the culture.

Even though the world is increasingly becoming a global marketplace and cultures around the world are being assimilated at a pace never seen before, where technology and manipulation change our ideas and values with strokes of a button, it's nice to see that the Saraguros in Vilcabamba are intent on preserving their culture while still being able to forge into the twenty-first century.

RETURN TO WEBSITES ABOUT THE SARAGUROS ...