Written in the early 1600s, the above passage, among other things, claims that the great Inka ruler, Huaina Cápac, had two structures of finely worked stone built in Cuzco (the capital of the Inka empire, now in Southern Peru) then had them taken apart and taken to Quito (now the capital of modern Ecuador, more than 2000 kilometers to the north) where they would be reconstructed. However when passing through Saraguro (at least 1600 kilometers to the north of Cuzco), in the Cañari region, a lightning bolt struck the main stone, the lintel of the main door. When Huaina Cápac was advised of this he took it for a bad omen, and ordered that all the stones should be abandoned there. And there they remained, to the day Morua was writing.

We read this passage with much interest, more than three-and-a-half centuries later. It was one of the only specific mentions of the place "Saraguro" in any of the Spanish colonial chronicles. But where were the stones? One possibility was suggested by the name of an area only a few kilometers to the south of town of Saraguro, Loma de Castillo Shayachina. "Castillo" is Spanish for "castle." "Shayachina" is a Kichua term denoting something being made to stop. Finding no Inka stones in the area, we abandoned any intensive search for what might have been more mythical than real and continued with our more ethnographically oriented work in Saraguro..

Dennis Ogburn, now at the University of California, Berkeley, began to do research more than a decade ago on the Inka occupation of the Saraguro region. And he found the stones described by Morua.. And has now published a detailed account of his findings: Power in Stones: The Long-Distance Movement of Building Blocks in the Inca Empire, ETHNOHISTORY 51, 1 ( Winter 2004): 101-135.

In Septmber, 2003, along with the Peace Corps volunteers in Saraguro, Pelah Hoyt and Mark Olson, we accompanied Dennis in a quick reconnaissance of some of the archaeologically important Inka and pre-Inka sites in the Saraguro region. Most of the photos on this page are a result of that reconnaissance. The worked stones shown in the photos on this page are all probably those transported from Cuzco to the Saraguro area. 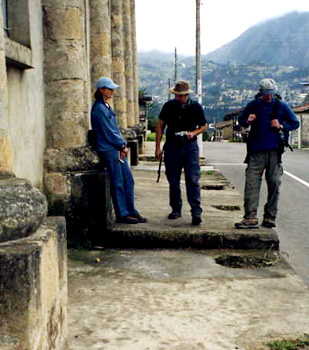 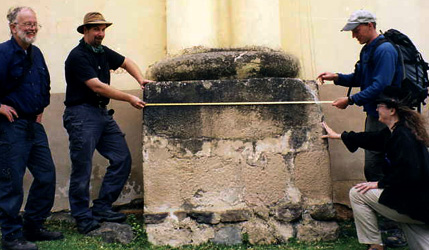 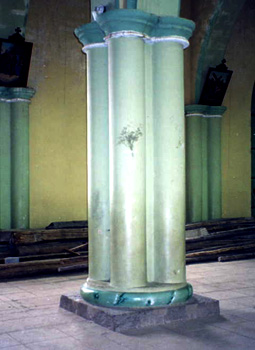 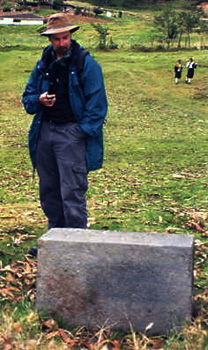 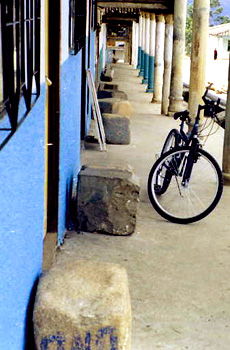 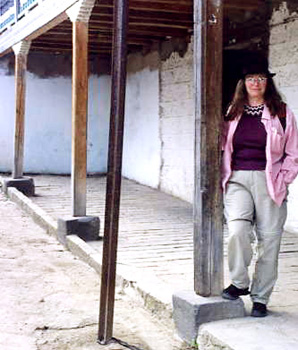 
Ogburn estimates that there are about 450 blue-gray andesite ashlars (cut and squared stone blocks) in the Saraguro region, scattered in (Fig. 6) and around (Fig. 5) the town of Paquishapa (which is a few kilometers across the valley and to the north of the town of Saraguro). Most of them are in the walls (as column bases--see Figs. 2-4) of the Paquishapa church (2004:104). With the aid of Aurelio Chalán Guamán, we have also recorded more than a dozen in the town of Saraguro, some serving as column bases (Fig. 7), others just "lying about" (right half of Fig. 1)

Ogburn had geochemical analyses done on samples from six ashlars in the Paquishapa area and and other analyses done with materials from known Inka quarries in the Cuenca area (Cuenca was the locale of Tomebamba, the "northern capital" of the Inkas and in the territory known to the chroniclers as "Quito"; it is the likely intended destination of the stones in the Saraguro area) and the Cuzco area. The geochemical evidence indicates that the stones came from the Rumiqolqa quarry (more than 1600 kilometers from Saraguro), a major source of materials for important structures in the Inka capital, Cuzco, and thirty-five kilometers east of it (2004:104).

Ogburn notes a local tradition that the ashlars originally came from a building at the Inka site, Villamarca (also known as Paredones) which lies a short distance above the town of Paquishapa.. However, visible building remains at that site consist of fitted rough-fieldstone construction; there is no other evidence at the site that major structures of fine-cut stone were ever there (2004:104). Ethnohistorical evidence also indicates the presence many of fine-cut stones, but no structure made of such stones in the area (2004:108-114). Finally, there are a number of accounts in the ethnohistorical records of other long-distance movement of stones by the Inkas (2004:114-120).

It thus appears more than likely that Morua's story is based on fact. The Inkas, probably under Huaina Capac, constructed fine-cut stone buildings in the Cuzco area, dismantled them, and were transporting them to their northern realm (called "Quito" by the early chroniclers) when something happened (possibly the lightening strike mentioned by Morua) that caused the Inkas to abandon them in the Saraguro area. And there they remain.

If Morua's story is true, "this endeavor may be the longest distance over which it is known that such large objects were moved in the prehispanic New World, with at least 450 stones weighing up to 700kg [three-quarters of a ton] being transported more than 1,600 km" [one-thousand miles](Ogburn 2004: 130). And, we might add, could these stones be the largest objects moved the longest distance overland, without the use of the wheel or of draft animals, anywhere in the world at any time? (And should be in the GUINNESS BOOK OF RECORDS?)

Note: for details on why and how such stones were moved, and many more details on other aspects of the material discussed above, see Ogburn's (2004) article cited above.