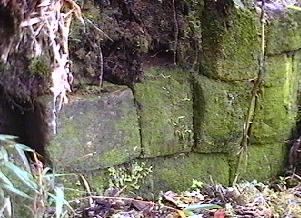 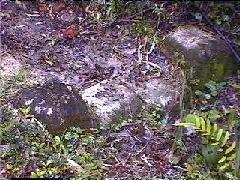 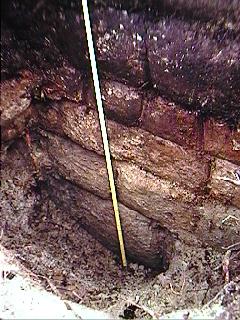 Ingapirca is an Inca site consisting of walls of prepared, rectangular shaped stone that is located at an elevation of about 3165 meters in the cloud forest on the Continental Divide to the south of Saraguro. In the middle 60s we actually walked over parts of Ingapirca without being aware of its presence because most of the standing walls had been grown over by a thick cover of mosses and other vegetation.

The upper right photo shows a section of trail crossing over a wall.

Some of the walls of this structure were cleared out by some local people in the late 1960s (photo left). While this action did provide additional information on the site, it exposed it to further destruction by people who took stones from the structure for their own purposes.

In the figure to the right we provide a PRESUMED plan of Ingapirca. This was derived by observing the few stones available to view and then poking a machette through a dense cover of mosses, lichens and other growth until we could hear the "clink" of metal against stone. All sections of the walls we could find in this manner fit the plan given. There may be much more (or a little less) to the structures than what is indicated in the plan. Finally, we should note that we found no clearly defined doorways or niches (which would have unequivocally identified [if in trapezoidal form] the ruins as being of Inka construction)--nor have we encountered sherds or other kinds of material remains at the site. We should note that Fresco (1983) presents a somewhat different plan of Ingapirca in which a main difference is that the structure to the lower right extends about four times further to the right than what we have shown (cited and depicted in Ogburn and Bravo 1995).

Note: This "Ingapirca" should not be confused with the better known and much better preserved site with the same name in the province of Cañar, to the north. 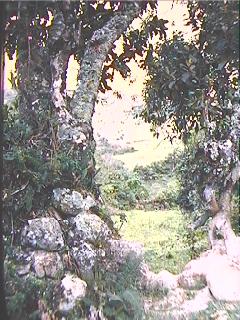 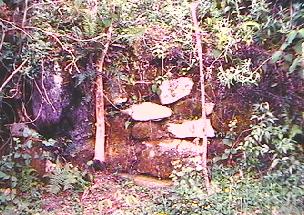 Tambo Blanco / Cuidadela (Cd) is located at an elevation of around 2500 meters, several kilometers to the east of San Lucas, in an area which has been cleared of forest and is mainly used for pasture and a limited amount of crops. The remains of walls are now largely crumbled mounds covered with vegetation and earth which, nevertheless, reveal the basic outline of what once was there. Max Uhle, who visited Tambo Blanco / Ciudadela in the early 1900s (Uhle 1923) claimed that a couple of decades previous to his visit it had served as a quarry (a common fate of Inca structures all over the Andes) for the construction of a church in San Lucas.

This site has been assumed by many, including Uhle, to be the "Tambo Blanco" mentioned for the Saraguro area by Cieza de Leon. Uhle also acknowledged that locally the area is referred to as "Ciudadela" rather than "Tambo Blanco" (1923:11]).

In our last visit (1994) we observed the presence of the three sets of buildings shown in Uhle's plans, as well as the terraces to the south of the south-westernmost structure (terraces indicated by the single parallel lines). Some of the terraces, however, were up to one hundred meters long--much longer than indicated by Uhle.

Uhle identified the buildings as a "cuartel" (top), a "palacio" (bottom left) and a building possibly for important women (bottom right).

Hyslop, who researched the Inca highway system throughout the Andean region, visited the area much later. He considers Tambo Blanco / Ciudadela to be an Inca "tambo" (way station or inn for official travelers). He identifies Uhle's palacio as residences inside two "kanchas" (walled enclosures with buildings and open space inside); Uhle's cuartel as a "kallanka" which could be used for ceremonies and for temporary housing of people such as passing soldiers; and Uhle's women's building as "qollqas" (storage rooms) (Hyslop 1992:155-163).

Mentioned, but not described, by Uhle (1923:11), are a set of storage rooms on a ridge above and to the west of Tambo Blanco / Ciudadela. He called the ridge "Buco"; we were given the name "Milla" and have used that name for the site (depicted below). 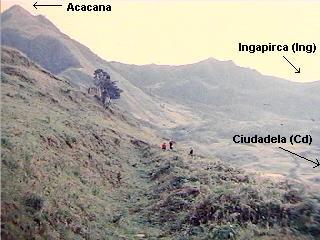 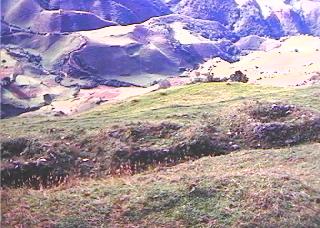 Milla consists of a series of terraces near the top of a ridge line that, starting on the south slope of Acacana (3439m.), runs between San Lucas and Tambo Blanco / Ciudadela.

On one of these terraces there are ten small, apparently identical structures laid out in a single line a little less than 100 meters long, at an orientation of about 10 degrees / 190 degrees. The structures were made of field stone and have largely fallen in on themselves. What remains evidences a diameter of around four-and-a-half meters across. A Saraguro friend who took us to the site claimed they were all originally round. However the remains of some structures (on the up-hill side only) seem to indicate a straight-wall structure. Perhaps they were "D" shaped.

A small number of sherds were found at Milla. They were generally nondescript orange or grey sherds, some with traces of red paint and/or evidence of mica tempering. The few rims encountered indicated mainly flaring-rim vesses. Four sherds were fabric impressed and two were of pedestal bases. No sherds were clearly of Inca affiliation.

In spite of the absence of sherd evidence (in a brief surface survey), we are probably safe in saying that Milla was the location for a set of Inca storehouses (qollqa / collca / kollka) that were associated with the tambo at Tambo Blanco / Ciudadela.

2002 note: In the middle 1990s, in the company of Saraguro friends we attempted to find the Milla collcas. We could not find them. We have since heard from other Saraguros that the collcas have all been destroyed.

What is probably an Inca elevated ceremonial platform, an "ushnu," (or "usnu") partially carved out of bedrock (or a huge boulder firmly anchored in place), is located just below the large canal that runs along the south and west side of the community of Las Lagunas. It is easily reached within a few minutes walk from the town of Saraguro. The ushnu and its vicinity are still used for ritual ceremonies as indicated in the photo below, right. The hole shown in that photo may once have served as a place into which liquid offerings (such as llama blood or chicha) could be poured and may have led at least down to the base of the ushnu. It is now plugged with earth, sticks, leaves, ashes and other materials. 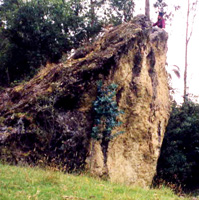 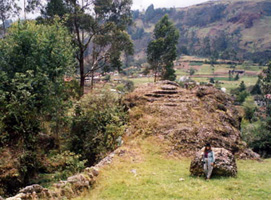 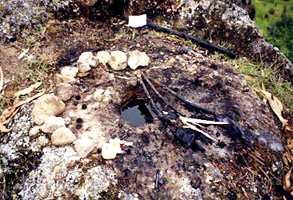 Ceremonial paraphernalia surrounding the
hole on top of the circular structure

Above the canal, close to the ushnu,
is Tasqui,  a small waterfall which
may have been associated
with ritual activities taking place
at the ushnu.

OTHER MATERIAL ON THE INCAS IN THE SARAGURO REGION

There are several other Inca sites in the Saraguro region. Among the the most notable discussed by Ogburn and Bravo (1995) and Ogburn (1996 & 2001) is the León Dormido/Paredones/Vilcamarca site, above Paquishapa. It is probably bigger and more important than the Tambo Blanco / Ciudadela site.